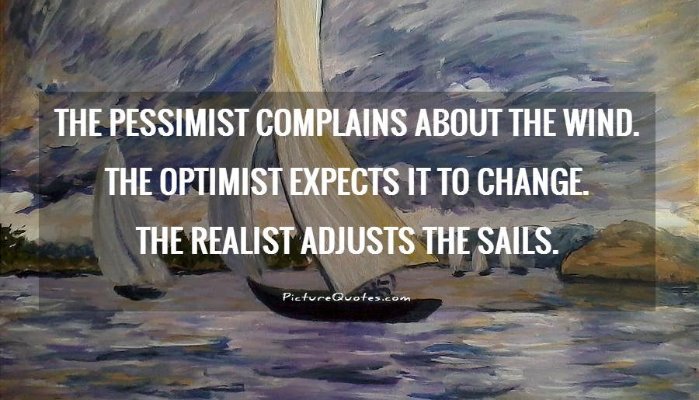 What do you think is the difference between cynicism and realism?

To me, cynicism is pure negativity…choosing to see all the reasons why something won’t work or why something is a stupid or bad idea. It’s also being distrustful of the intentions and motives of others without due cause to be distrustful…seeming to prefer to think that others are up to no good or only concerned about themselves.

Realism, on the other hand, is about the practical use of things, or ideas. It’s about common sense. It’s a way of objectively viewing a situation and determining the best course of action to achieve the desired outcome.

When I think of realism, I am reminded of Admiral James Stockdale and the Stockdale Paradox that Jim Collins wrote about in Good to Great: Why Some Companies Make the Leap…and Others Don’t. Admiral Stockdale was the highest ranking POW during Vietnam. He received the Congressional Medal of Honor for his leadership, bravery and courage displayed during his captivity. Admiral Stockdale noticed that the unbridled optimists who were captives suffered greatly from their own mental anguish and disappointment because they would convince themselves that they would soon be rescued even though there was no logical proof for that belief–the “think your way to success” group. He also noted that the self-declared pessimists suffered just as greatly from their basic beliefs that the entire situation was hopeless and they were powerless victims–“we are all doomed” crowd. Admiral Stockdale determined that there’s a paradox from which true hope and power is born. The Stockdale Paradox goes like this: First, you must have an unwavering faith that it will all be okay in the end, however things end, while (here comes the paradox) brutally confronting your current reality. Confronting reality does not mean arguing with the circumstances, blaming, shaming, or value judging. It simply means to acknowledge the actual, factual data of your present circumstances and determine the best course of action to take to get from where you are to where you want to be.

I believe it’s worth doing the hard stuff, the scary-holy-crap-I’m-really-going-for-it stuff exactly because the odds may be against you, because it’s hard! If whatever it is was easy then anyone could do it, right? I stand in the belief that the thrill of victory lies in overcoming the obstacles, adapting to the difficulties, and improvising with what’s presented, not necessarily in crossing the line first or fastest.

Cynics rarely even get started. Realists have unwavering faith while embracing their current situation and taking prepared action, and then they celebrate success!

What do you think?